ActiveCampaign's category-defining customer experience automation platform (CXA) helps over 130,000 businesses in 170 countries meaningfully engage with their customers. The platform gives businesses of all sizes access to 500+ pre-built automations that combine email marketing, marketing automation and CRM for powerful segmentation and personalization across social, email, messaging, chat and text. Over 75% of ActiveCampaign's customers use its 850+ integrations including Microsoft, Shopify, Square, Facebook, and Salesforce. Pricing starts at just $9/month. - Automate personalized experiences across all your customer touchpoints - Track buyer preferences, behavior, and many custom attributes across the entire customer lifecycle for deeper segmentation and more effective outreach - Customize sends based on almost any parameter, so your messages are always targeted for the right audience - Use data from the entire customer lifecycle to choose the best content, send time, and delivery channel for each customer - Create entirely customized campaigns with minimal effort, then improve your send strategy in real time based on customer behaviors - Replicate the 1-1 personal experience for every customer, no matter how big your business gets ActiveCampaign offers free customer service, including live chat and phone support, a self-help knowledge base and complementary data migration from other programs. It also offers one-on-one consulting, expedited support and free custom design services for enterprise customers. 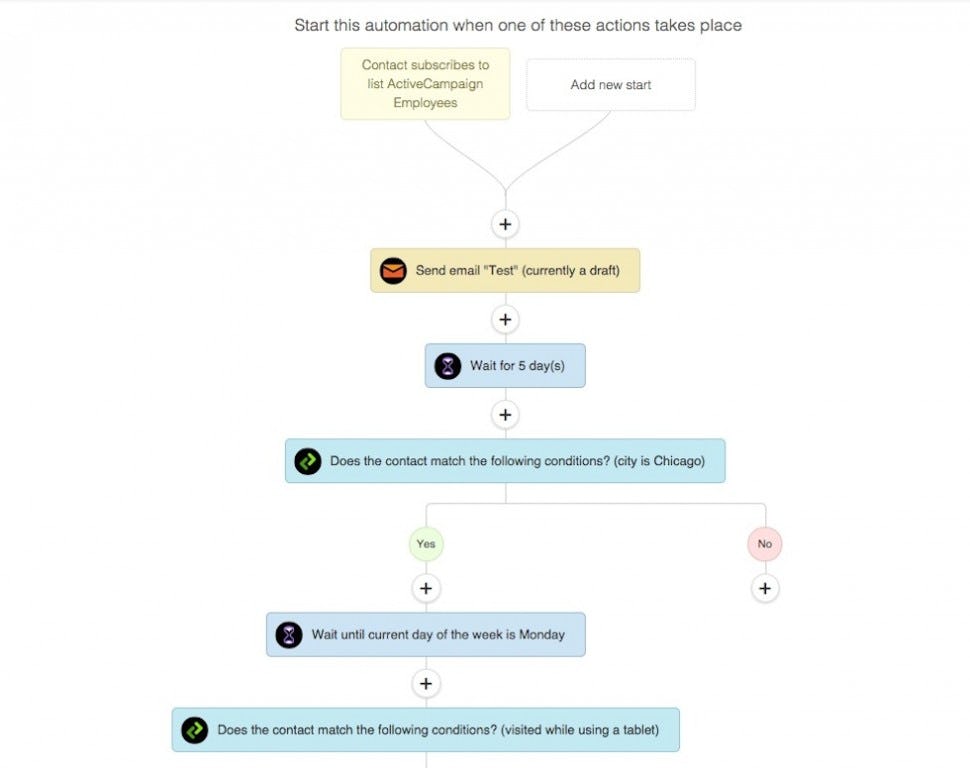 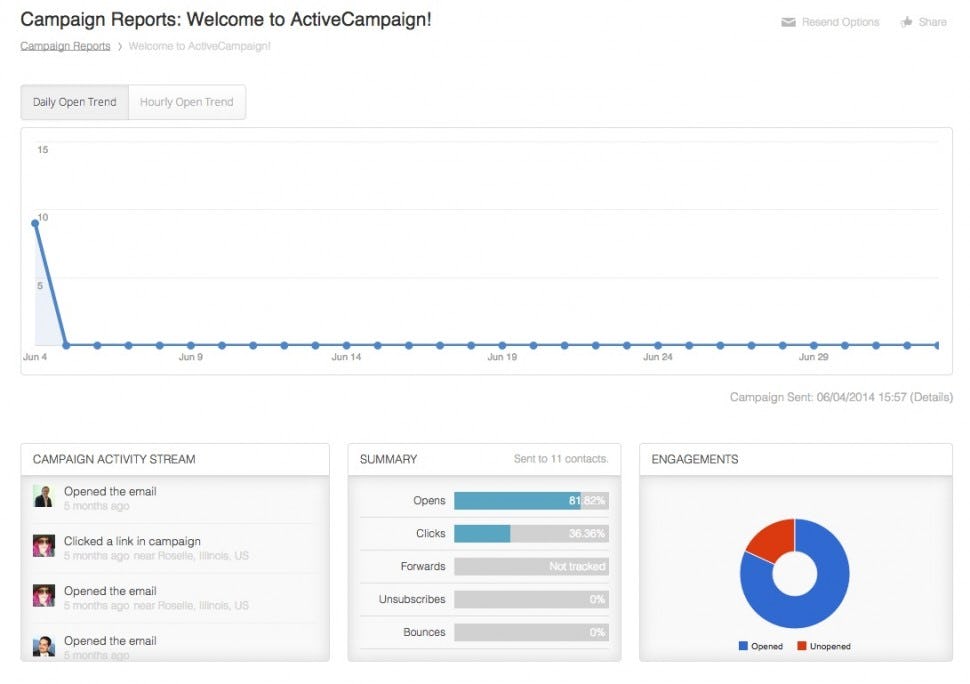 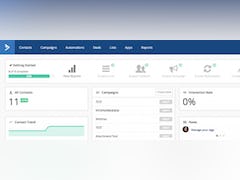 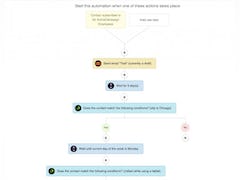 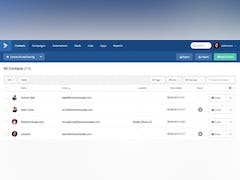 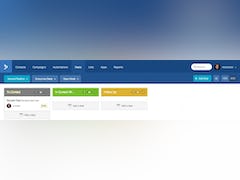 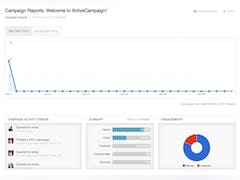 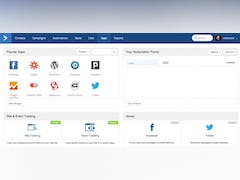 4 (72 Reviews)
ActiveDEMAND is a cloud-based marketing automation solution that caters to marketing agencies and helps them to create... Learn more
Compare Learn More

It's immensely positive. Their support is quick when you have questions. They are very helpful. They have teams of people there to help educate you on how to improve your implementation of the product. It's very special and encouraging.

I went into ActiveCampaign knowing nothing about CRM's. I figured it out and implemented it with ease and that's quite a contrast to Salesforce, SugarCRM, KEAP. The interface is easy to understand and setup is intuitive. Support is incredible and they are constantly improving the product and hiring good people. When they add new products they are well planned out and tested.

I wish they would add conditional logic to forms. Their API support for developers could also be improved. They could also add more form types to allow a question by question path like Typeform but that's minor.

Google Forms could not be a CRM for us. It was helpful in the early days of getting going but

Reasons for Switching to ActiveCampaign

HIPAA compliance, easy of use, cost, and available features. AC is just an incredible product at the right price for small businesses.
John H.
Value for Money
5
Features
5
Ease of Use
5
Customer Support
5
5
Reviewed on 15/10/2021

My overall experience has been very good. When I was first getting to know the system I used their chat support to figure things out and they sent me step by steps screen shots and customized video walkthroughs. That's what really won me over, knowing I can do just about anything I needed and instead of trying to take half a day to figure out how to do it on my own, they simply walk me through it now.

I like how easy it is to use the different mechanisms of ActiveCampaign. The tagging system is easy to use and really helps to organize my list. It also makes it so I don't have to create multiple lists and duplicate emails. I also have to say, their customer support has been awesome. Their chat support people will send me step by step screen shots on what to do and even record video for me to watch them set things up and explain how to do something. I mean seriously, their support is 5 star.

They also have a really good API system. I am able to connect different pieces of software to ActiveCampaign so my contacts or organized as they come in.

I don't really have anything to add here. It's easy to use and the support is fantastic.

Activecampaign sets the bar for building automations, with great sorting and filtering features including customer records, tags, lists, conditional rules/routing, e-commerce data such as purchases, crm pipelines and even a custom event layer. We have created very complex integrations for dozens of businesses ranging from E-Commerce stores, to Gyms to local businesses.

It's really simple to learn and use, and powerful enough to tackle even the most complex business processes. This includes in-store purchases on a POS to sending out emails or automation's based on purchases or LTV. It also supports multiple E-Commerce platforms natively, but be aware those features are nearly 4x the price to unlock after the trial.

After months of issues that resulted in one of our clients losing an excess of $40,000 in revenue, we can no longer recommend activecampaign. Poor support was to blame for this issue, with it being impossible to get someone on a call even though we pay 6 figures a year for service.

Activecampaign is growing really really fast. Because of this, They have pretty terrible support and there are also long-standing bugs that they seem to have no intention to fix. For instance, the system is supposed to generate previews for each automation's email steps and in various other places, but instance shows a broken image. We have inquired about this to the support to be told they are aware it's been broken for over a year and have no ETA or intention on repairing it. We have this problem on all our client's accounts(dozens), and it's a serious issue with UI/UX but they don't seem to care.

There are also some major logic issues, such as if you filter an automation to show anyone with 0 purchases, it doesn't work. We also inquired about this but got another non-response...

So basically, where it works, it works well but there are a few major issues and they don't seem intent on repairing them, even though they are steady releasing more features to add to their pricing tiers. Overall, it's hard to find another system that provides the ease of use, features, and value of activecampaign but the support and existing bugs are a nasty/necessary compromise.

Overall, I have been extremely happy with ActiveCampaign and don't see myself ever switching to another provider.

ActiveCampaign is crazy powerful and has so many features that make it a fabulous selection for email marketing software. I've used a few different email marketing programs and definitely think ActiveCampaign is the best - the tagging features are way superior to a lot of the entry level offerings and the automations are fantastic. On top of this, the service is brilliant and I feel confident in the team's ability to help me with any issues I'm experiencing.

Because it is so powerful, it can be a little confusing to new users who aren't tech-savvy. There is plenty of education though, so I do believe it is worth pursuing.

Reasons for Switching to ActiveCampaign

The pricing was far better for what was available and I had real life recommendations from other users.
Laura B.
Value for Money
5
Features
5
Ease of Use
4
Customer Support
5
5
Reviewed on 07/09/2021

I LOVE ActiveCampaign. I feel that the tools are evolving and relevant for my business. It has transformed my ability to identify leads, track their progress, convert contacts into members, and track and respond to their journey within my website and club.

I was with MailChimp. I moved to ActiveCampaign for the features that I am most fond of and use the most. Those are list segmentation, CRM, their existing recipe to help build automation, the automation functionality, in-depth segmentation, and tracking every move a contact makes.
The transition was seamless; ActiveCampaign moved my whole list for me. I was a bit overwhelmed at first because of the high level of functionality. But, their customer service and support are the best I've encountered in any company that I deal with to run my business. I love them!

I don't love the functionality of the design elements in the Campaigns. Mainly, there is no way to set the overall design perimeters. So, every time you add a block, you select your font and have to reset the design. The time making adjustments adds up.